skip to main | skip to sidebar

"before" picture of Mac! 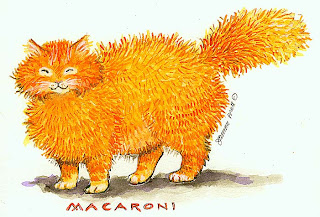 This is my daughter Sophie's cat Macaroni. Brother of Tortillini, Ziti and Noodles.
Mac has been known to house his very own "micro habitat/environment" on his tummy, in all that fur. His tummy habitat has been home to slugs, earth worms, thistles, pine needles...well you get the picture!
Mac now gets a "spring cleaning cut" at this time of year. This is an illustration of "before spring cleaning".
Stay tuned for "after spring cleaning" !
Posted by jeannie brett at 9:37 AM 7 comments: 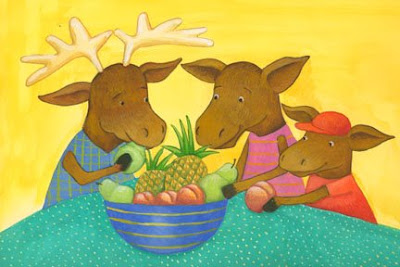 Last week I finally finished the last of the three Math Fun
books I've been working on since January for Picture-Window
Books. It was a fun job but I'm glad to be done with it!
Posted by Unknown at 1:11 PM 3 comments:

Deep in Israel's Jezreel Valley, lived a man known to his mother as Rody and to all the rest of Kibbutz Hanan as Chicken Man. 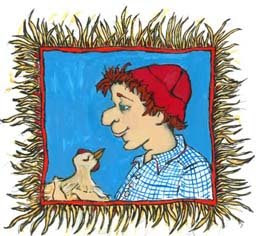 is back in print. It's based loosely on my experiences working on Kibbutz Mizra.

My friend Rodney worked in the kibbutz chicken coop. He told me all about the chickens,

especially Clara, a chick on the third floor, who wasn't like the others. He lovingly

imitated her nervouse wobble and cluck. I envied Rodney. The chicken coop seemed like

Africa and I begged to take his place in the chicken coop. When I read the work list

and learned that I had been given his job, I was ecstatic.

The next day, wearing Rodney's old hat, his long sleeved shirt, and his rubber boots, I

stood in front of the four-story kibbutz chicken coop eager to begin work. I was soon to

Haim, the kibbutznik in charge of training me, took me to the chicken coop's elevator.

Together we rode up to the fourth floor, where the oldest and sickest chickens resided. A

dead chicken was in our path.

Haim picked it up. "Happens." He shrugged.

Not in Rodney's stories, I thought.

The other floors of the chicken coop were very noisy. The chickens pecked and poked

and were unwilling to move, making it impossible for me to gather their eggs.

"Sometimes you have to push the chickens off. Like this," said Haim.

It looked to me like Haim was hurling a chicken across the room.

"Doesn't that hurt the chickens?" I asked.

My head itched under my hat. My hand was already covered with scratches from the

pecking chickens. My nose was rebelling against the pungent air. I stood still a moment

and then I knew. Every part of my body knew. The chicken coop was a terrible place to

work. I thought about Rodney and his stories about Clara and the other chicks and

smiled. Rodney was a great storyteller and a great teacher.

I learned that day there in a four-story chicken coop, on Kibbutz Mizra in the

Jezreel Valley, that even amid hurling chickens, piles of hay and eggs, flying chicken feathers and

sticky chicken droppings, noisy clucking and pecking, there were stories to be found.

Posted by Michelle Edwards at 10:40 AM 3 comments: 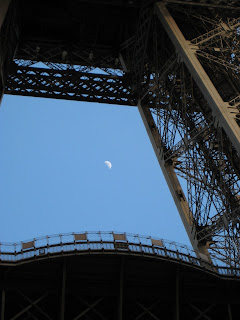 Just found this cool photo from our trip. Can you see the moon? It was taken from under the Eiffel Tower.
Posted by Liza Woodruff at 9:50 AM No comments: 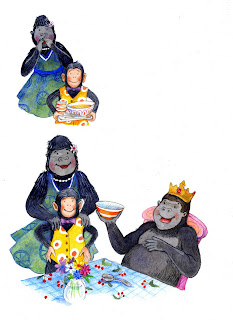 I finally found a use for my old National Geographics as reference. It was worth saving them all those years. Here's the last piece from my latest project that goes along with my previous post.
Posted by Liza Woodruff at 7:38 AM 2 comments:

trying again with the puppet link

http://www.youtube.com/swf/l.swf?video_id=4hHKvVU9fmY&rel=1&eurl=http%3A//www.puppetspuppets.com/
Posted by Michelle Edwards at 10:17 AM No comments:

Check out this! My middle daughter helped our good friend, and puppeteer Monica Leo post her work on youtube.
o_id=4hHKvVU9fmY&rel=1&eurl=http%3A//www.puppetspuppets.com/
Posted by Michelle Edwards at 3:21 PM No comments: 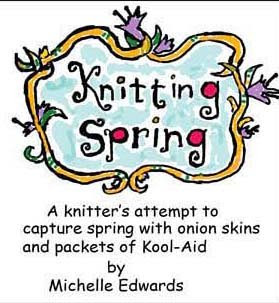 I had hoped to create a new image each week. I may still do this, but probably not today. This image is part of a graphic essay I just finished for Lion Brand. My first. It was fun to do, but took quite a while for me to figure out all the technical stuff. I think I'd like to try and do more of this kind of writing and illustrating. It is an extension of the illustrations I did for my Jackson Friends books.

Amy is my inspiration for the "knitting spring." Her yarn. We did a yarn exchange and what she sent me, what she hand dyed was so glorious that I really did feel like I was knitting spring.

And one last bit of news. A pod cast with yours truly. Talking about my favorite subjects; children's books, family and knitting. 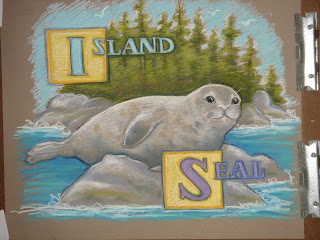 About 2 years ago I had the pleasure of visiting the Island of Frenchboro off of the coast of Maine. I did an illustrator residency program for 2 days at Frenchboro's one room school house. The 15 children were wonderful along with the two teachers. This is a pastel sketch I did for the school as a memento of my visit. I hope to go back again....it was a wonderful experience.

ok, i did it! i'm no longer brand new blogger!